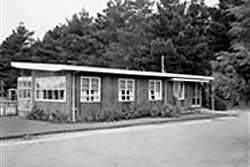 Turner Primary School opened in 1953 and is one of Canberra's oldest schools. On 29 January 1953, 90 children in three kindergarten classes were enrolled and attended school in the old building previously occupied by the Canberra Nursery School at Acton, pending completion of the building at David Street. The building was not completed until November. On 17 November 1953, a group of 160 students began in the new Turner building. On 30 November, 108 children in first grade transferred from Ainslie School with two teachers. At the beginning of 1957 the Turner Primary School Condamine Street building was opened.

In the late 1960s the number of students decreased. The vacant space in the old infants' school building was refurbished and students with a disability were enrolled in 1970 to what was known as the Hartley Street Annexe. The hydrotherapy pool was built providing on-site therapy services to students with disabilities. In the early 1980s the two sites were combined and the school was renamed Turner School.

Turner School continues to have an enrolment of both mainstream students and students with disabilities and special needs. All students at Turner learn together in a supportive and inclusive environment.

The school retains many links with its history. The school maintains as its motto: Valuing differences, Celebrating learning, Achieving together.  Students at the school still recite the school pledge and belong to the four sporting houses – Gloucester, Gowrie, Isaacs and Stonehaven (named for early Australian Governors General). In 2013 Turner School celebrated its 60th birthday. Children, staff and the community spent the year as researchers, journalists, historians, artists and creators inquiring into the past 60 years.